Stand by Your Man: The Tammy Wynette Story

A musical by
Mark St. Germain 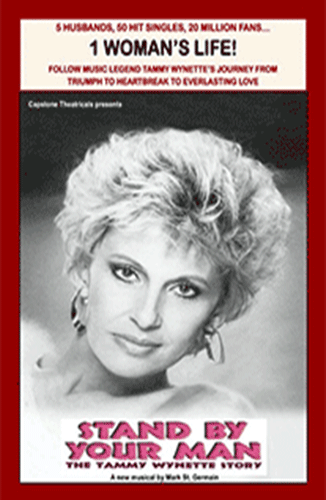 When Tammy Wynette was in love… in pain… or, as was often the case, both at the same time, she sang about it. The First Lady of Country Music recorded, performed and sometimes wrote many of her greatest hits, from “I Don’t Want to Play House Anymore” and “D-I-V-O-R-C-E” to “Golden Rings” and “Until I Can Make It on My Own,” in response to events in her often-stormy personal history.

Unlike the tremendously successful Patsy Cline musicals, which in several different incarnations, were mostly just a sampling of her concerts, Stand By Your Man truly is the Tammy Story. Thís musical chronicles the life of this country star. The show deals with most of Wynette’s most difficult episodes including the difficult relationship with her mother, her divorces, her addiction to prescription drugs, her illnesses, her very public feud with Hillary Rodham Clinton, and her famous kidnapping incident. The Fort Worth Telegraph said “Humor perfectly peppers the tragedy and triumph. But ultimately the show’s heart and honesty are what bring it to life. Also, miraculously, it squeezes a host of songs into the story without cluttering the proceedings.“

“So much of her music is autobiographical, which makes it so much easier to make a musical out of it,” says Mark St. Germain, the show’s playwright, and award-winning author of Gift of the Magi and Camping with Henry and Tom. “Tammy’s music is about someone who is exposing her pain. You can track her life and what she felt from the songs she chose to sing.”
There are 28 of Tammy’s hits in this show. It’s ironic, however, that the title song was Wynette’s biggest hit because she had five husbands. But Tammy was a woman who loved being in love. She was extremely strong, but there was a part of her that always looked to be taken care of. That probably led her to make some hard decisions, especially early in life. The one place she was truly happy was on the stage
It’s the “Tammy Wynette” legend and all of her hits that fill the theatre every night for Stand By Your Man, but it’s the story that unfolds that has people leaving with the knowledge knowing they’ve seen a thoroughly moving and entertaining evening of musical theatre. 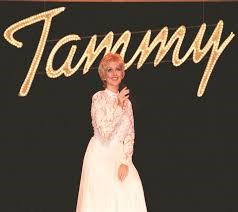 My audience loved it! I want to book them again!